WeWork’s Creator Awards aim to identify innovative ideas and the entrepreneurs behind them,
and support their early stages. This year, the global competition took place in Berlin, London,
Austin, Detroit, and Tel Aviv, among other cities.

Siraj Technologies Ltd. participated in the Tel Aviv Creator Awards. Our idea and our dream to
become a beacon of light for aspiring Bedouin engineers impressed the judges, and we were
selected from over 700 applicants to advance to the final round, which took place at an awards
ceremony on October 26, 2017.

Siraj is a top-tier software development company with a social mission to integrate the Bedouin
community in Israel’s Negev region into the country’s thriving tech sector, and to build a hi-tech
community in Bedouin society. As a social enterprise, we strive to craft a new iteration of “Start
Up Nation” – one that includes all its citizens. We were among many innovative and impactful
ideas in the Creator Awards competition. However, the urgent need we aim to address, and our
will to create a brighter future for our community all contributed to us being a competitive
applicant and, ultimately, a winner.

We were awarded a prize of $18,000 that will support our efforts to train future Bedouin
engineers, and to hold tech community-building events for Bedouin engineers, community
leaders, college and university graduates, teachers, and students. 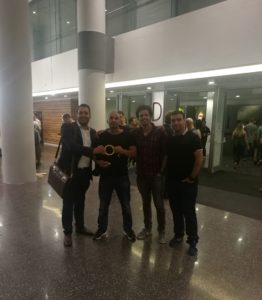